The more that I learn about the history of Shetland sheep the more amazed I become at the significance of this fine breed in the wool industry of Great Britain. For upward of 1,400 years these sheep have lived in Shetland, a group of over one hundred tiny islands off of the coast of Scotland in the North Sea. The main industries of these isolated islands through the centuries have been fishing, farming, and producing knitwear. In the 18th, 19th, and early 20th centuries, hand knitted wool hosiery, gloves, caps and other apparel became the leading source of income. Girls learned to knit at the age of about four to six years, and women took their knitting with them just about everywhere they went. The needles flew as they walked down the road or visited with friends.

After extensive research in the history of Shetland sheep, George L. Benedict believes that the years between 1780 and 1810 were most crucial in the development of the breed. For 300 years, the wool industry was the most important industry of Europe, and Britain was pressing to take the lead. King George III commissioned Sir Joseph Banks, a celebrated scientist of the day, to find or breed a sheep that would produce wool that would rival that of Spain’s Merino.

While Banks had his eye on the Merinos of Spain, Sir John Sinclair of Scotland was promoting Shetlands and sent King George some socks. As a result Shetland hosiery, being light-weight, warm and soft, became the king’s favorite. The people of Shetland were encouraged about improving their sheep and the pressure was on to prove whether these Shetlands could rival Merinos. The two breeds were inevitably crossed. How much the Merino influenced the Shetland breed is in question, but there is no doubt that Shetlands became a leading breed for the highest quality wool in all of Great Britain, and their wool was popular with kings and the common man alike.
​
This is just one chapter in the amazing survival of the breed of Shetland Sheep found in “The Sheep of Shetland; a Historical Perspective” by George L. Benedict, an article found at:  http://www.shetland-sheep.org/docs/Sheep-of-Shetland.pdf
Shetland sheep have lived in the Shetland Islands for 1400 years, but in recent times had become an endangered breed.  In the United Kingdom they were protected and not allowed to come to North America until 1980 when Colonel G. D. Dailley gained permission to bring thirty-two  Shetland sheep to Springfield Farm in Ontario, Canada.

THE SHETLAND SHEEP BREED IN THE 20TH CENTURY
​

​For centuries the sheep on the Shetland Islands were a breed unto themselves. They were double-coated with clean legs and faces. Then Merinos, Scottish Blackface and Cheviots were introduced along with other breeds primarily to increase size and meat production. The need to do away with guard hair and standardize the breed with a fine fleece to compete with the Merino was also a motivation.
But during the first part of the 20th century, Shetlanders realized that due to a prevalence of cross breeding, the wool from the Shetland Islands was greatly deteriorating. Studies showed that purebred Shetlands no longer existed in some districts. Shetlanders realized that they were endangering their prestigious wool industry. This would put the economy of the islands in great jeopardy.  A group of Shetlanders banded together and established the Shetland Flock Book Society in 1927. Led by Dr. J. C. Bowie of Bixter, they set up breeding standards to preserve the breed from vanishing. The Department of Agriculture for Scotland worked alongside them and offered a subsidy for purebred Shetland rams. These efforts helped saved Shetland sheep from becoming extinct.
However, the breed continued to be threatened for decades. Shetlanders became involved in the production of oil in the North Sea. People began to wear the new synthetics which replaced wool. In 1973 the Rare Breeds Survival Trust was established by Joe Henson in the United Kingdom to prevent native breeds of livestock from being lost. In 1977 Shetland sheep were classified as “endangered.”  Due to the heroic efforts of individuals in this society, the future of the Shetland sheep breed was turned around in a few short years. By 1985 the Shetlands were removed from the endangered list.

The credit for Shetland sheep being introduced to North America goes to Colonel G. D. Dailley of Cambridge, Ontario, Canada. In the 1930’s Colonel Dailley was importing wild animals from all over the world to Ontario. There he raised offspring to sell to zoos and circuses. He believed that wild animals raised in captivity survived better in these settings than animals born in the wild. Through his travels around the world, the Colonel met many key people who played a part in his endeavors to promote exotic animals.
During the early 1970’s while in Great Britain Colonel Dailley met Michael Rosenberg who was with the Rare Breed Survival Trust. This trust had just been established to preserve domestic breeds of animals in the United Kingdom which were close to extinction. Mr. Rosenberg told Colonel Dailley about a greatly endangered special breed of sheep from Shetland. Shepherds from the islands were able to make more money working for oil companies in the North Sea and had not kept up their flocks. Crossbreeding was common and fewer and fewer pure Shetland sheep were left.

Colonel Dailley became very interested in these hearty little Shetlands that produced lovely fleeces and delicious meat. With the help of Mr. Rosenberg twenty-eight ewes and four rams were selected for export to Ontario, Canada. But getting the sheep to their new home involved much red tape. The sheep were held in quarantine in Great Britain for a year. Then in 1980 they were sent, not by boat but by plane to their new home near Cambridge, Ontario on Colonel Dailley’s farm.

The sheep were quarantined to the Dailley farm for life and their offspring had to be two months old before they could leave the farm. Many other obstacles such as weather, predators, and fire threatened survival.  But thanks to the dedication of Colonel Dailley and his family the little sheep prospered. Soon others in Canada and then in the United States began to buy these remarkable animals. Today they can be found in most provinces of Canada and in most states in the United States. Many are registered with the North American Shetland Sheepbreeders  Association.
​
For more information about this wonderful organization dedicated to preserving and promoting Shetland sheep go to: www.shetland-sheep.org

The special gift that Colonel Dailley gave to North America is greater than we can comprehend. No one knows how many individuals and families have been blessed with the great joy of owning and caring for Shetland Sheep.

Most of the information for this article came from “Who is ‘the Colonel’ Anyway?” by Tut Doane, who first brought Shetland sheep to the United States in 1986 and was a personal friend of Colonel Dailley. The article was published in the 1991 October issue of NASSR News, the official newsletter of the North American Shetland Sheepbreeders Registry which was established that year.

How Shetland Sheep Came to Texas

My father, Rust Largent, of Fort Davis, Texas, was the founding breeder of miniature Herefords. He provided breeding stock to many people on small farms for whom these cattle were ideal both in the United States and internationally.
Through this enterprise he found out about Shetland Sheep when they were beginning to be imported into the United States from Canada. He became acquainted with some of the earliest US breeders of Shetlands one of whom was Kevin Chamber in Indiana. Mr. Chamber, a sheep man for his whole life, felt that Shetland sheep were the most outstanding breed of sheep that he had ever come across. He was importing them into the US and obtained ten head of sheep for my father from Colonel Dailley in Ontario, Canada.
My brother, Roy Largent, after delivering a load of miniature Herefords back east, brought these Shetlands from Indiana to Texas in September of 1991. In this same year the North American Shetland Sheep Breeders Registry was formed and the Texas Shetlands, whose ancestors came from the Shetland Islands, were on the list of some of the first Shetlands to become registered in North America.
Raising Shetland sheep and caring for them became a family project for my parents and my brother’s family. There were eventually 40 to 50 sheep in the flock. My mother, Jane Largent, an excellent knitter, became an expert at evaluating fleeces. She had them sent to mills to be made into beautiful yarn for knitting. My family was sometimes involved with rooing the sheep in the spring. My children and I took spinning, dyeing, and weaving lessons and learned to enjoy the wool in fiber arts.
But as the story goes with many families, sometimes projects fall by the wayside. My father, passed away and the young people in the Largent family married or went off to school. My children were grown and out of the nest. I had always dreamed of having a few of these sheep around and so obtained three ewes and a ram in 2008. Three years later I was able to get another ram from the original flock. For new blood I obtained two ewes and a ram from Dawn Driskill in Colorado. Recently I acquired three more lambs from Wes Tibbs in Oklahoma and Becky O’Neill in Indiana. The flock is back up to about 40 sheep again.
I am so amazed to own Shetland Sheep which have such a rich heritage. It is also amazing to think of the times that the breed was almost lost throughout its history even in my own family. 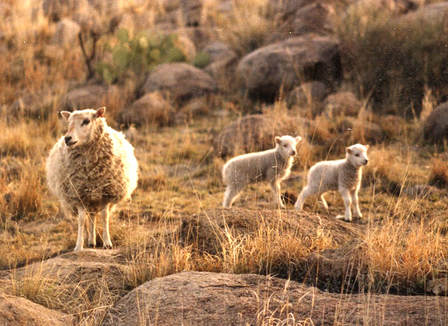 One of the original ewes from Canada with her
twins. The Largent family bred for white lambs.